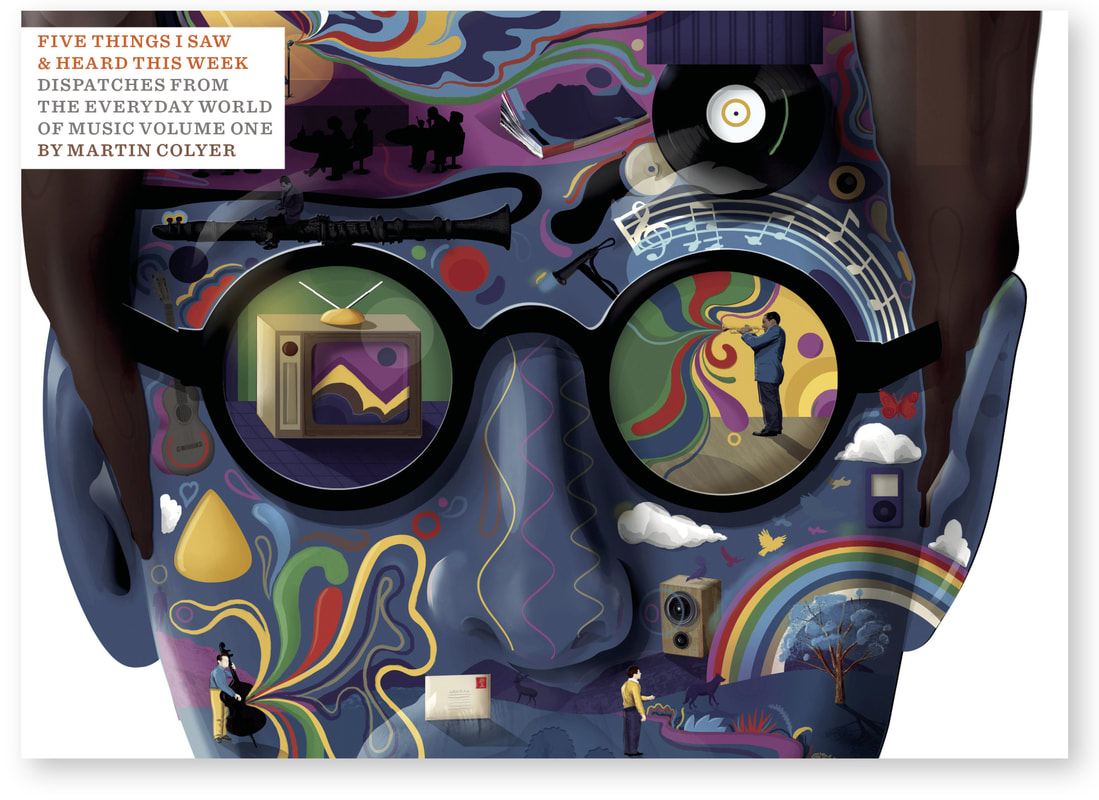 Martin Colyer – author of the (almost) weekly music blog “Five Things I Saw & Heard This Week” – has long been a friend and supporter of  this site's associated audiophonic productions.  (In fact, Martin is the brains behind the splendid Eclectic Eel logo.)  We would like to repay the compliment by drawing your attention to a new - and beautifully designed - book written and compiled by Martin and based on his blog.  Incidentally, it goes without saying  (but we'll say it anyway) that, notwithstanding the Five Things association, this site would have no hesitation in recommending Martin’s book to the discerning  and inquisitive music fan and reader.
Now, read on…
'Five Things I Saw and Heard This Week is an offbeat take on music in everyday life, whether heard on screens, in supermarkets or on stages. From award shows to obscure acts, I follow my interests to end up down some fascinating cul-de-sacs. Fact-filled, entertaining, informative and inspiring in equal measure, Five Things will make you search out hidden gems in your record collection or on the world wide web, and possibly introduce you to your next favourite musician.'

You can order the book by clicking on either of the images on this page or just here.

ABOUT THE AUTHOR
Martin Colyer has been involved in music throughout his life. He is the son of Bill Colyer, the man who gave the name "skiffle" to the burgeoning DIY movement that happened in Britain in the early fifties. Bill’s brother was renowned jazz trumpeter, Ken Colyer, leader of a band that included the huge influencers Alexis Korner and Lonnie Donegan (this story is brilliantly told in Billy Bragg’s recent book, Roots, Radicals and Rockers). Martin was in an R ’n’ B group called Hot House in the Eighties, and although ultimately unsuccessful, managed to spend £1.3m of RCA’s money. They were fronted by singer Heather Small and worked with Susan Rogers of Prince fame, Ron “Have Mercy” Kersey, writer of Disco Inferno, and toured supporting Barry White. Martin is also the co-founder, along with Mark Pringle and Barney Hoskyns, of the world’s number one music journalism resource rocksbackpages.com. In 2012 he won a Parliamentary Jazz Award for his work on Goin' Home: The Uncompromising Life & Music of Ken Colyer, a large-scale biography of his uncle. A magazine designer and art director by trade, Martin started writing a weekly blog, Five Things I Saw and Heard This Week, in 2012. It focuses on music encountered in day-to-day life and is not tied into the way the music business runs (with release dates and hype). Martin also writes on design and illustration for the beautiful graphics magazine, eye, which is based in London. He makes music at martincolyer.com and southwesternrecorders.com. He likes reverb, outré scents, Bob Dylan's boots and the writing of Joan Didion.